At our offices in Glendale and Los Angeles, CA, Dr. Vicken Sahakian, Dr. Michele Evans, and Dr. Yvonne Yanqing Han can diagnose the cause of female infertility, and then recommend the best fertility treatment. At Pacific Fertility Center Los Angeles, our most common infertility treatments for women include intrauterine insemination (IUI), ovulation induction, and uterine surgery.

IUI (artificial insemination) is a fertility treatment that uses a catheter to place a number of washed sperm directly into the uterus.

Ovulation induction can help women who do not ovulate or ovulate infrequently increase their chances of conception.

Fibroids are removed either through an open abdominal procedure or through laparoscopy, depending on the number, location, and size of the fibroids.

"I went from never wanting to go thru IVF to now talking about what a wonderful journey it really is, especially when you are told this is your only hope of having a baby, being my husband is a cancer survivor. I today have a beautiful daughter who turns 1 tomorrow. Thank you for giving me the most priceless gift in the world!!!!!!!" Tina K. 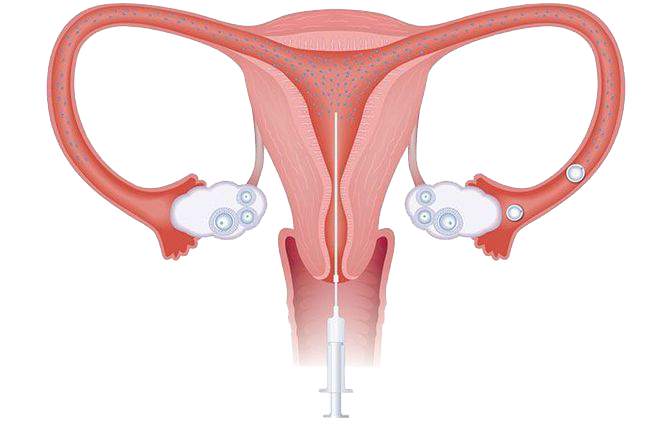 With intrauterine insemination, sperm is injected directly into the uterus to increase chances of conception.

The timing of an IUI is critical. Usually, serial ultrasound examinations are performed over a period of several days to pinpoint the day of ovulation occurs. This can be detected using home urine monitoring kits or sometimes by administering a trigger injection, called hCG, to release the egg at a specified time.

The IUI procedure is simple and may be performed even if the woman is not receiving medication to improve her egg production. Many physicians will encourage women to take medications to stimulate the ovaries to increase egg production in order to improve the chance of achieving pregnancy.

A semen sample will be washed by the lab to separate the semen from the seminal fluid. A catheter is used to inject the processed sperm directly into the uterus. This process maximizes the number of sperm cells that are placed in the uterus, thus increasing the possibility of conception. The IUI procedure takes little time and involves minimal discomfort. The patient is asked to perform a home pregnancy test two weeks after the IUI to check if it was successful.

Women under the age of 35 usually have higher rates of success than women over age 35. With IUI, as with other methods of artificial insemination, the success rate depends primarily on the health of both the sperm and the woman.

For women who do not ovulate at all or ovulate irregularly, we use medications – either injections called gonadotropins or pills called clomiphene citrate – to stimulate development of a single follicle and ovulation of a single egg. For women who ovulate normally, clomiphene and/or gonadotropins may improve the chances of becoming pregnant by stimulating the ovaries to produce more than one follicle and the subsequent ovulation of more than one egg. Depending upon the situation, one of several infertility treatments may be recommended.

In most cases, you will take the clomiphene or give an injection of gonadotropins once per day, in the evening (between 5 pm and 8 pm, for example). The pill is taken orally and the injection can be given under the skin in most cases.

After taking the clomiphene or after a few days of injections, you may be asked to have a pelvic ultrasound to measure follicle growth, and possibly a blood test to measure hormone levels.

Depending upon the results of these tests, the gonadotropin dose may be increased or decreased. Blood testing and pelvic ultrasound may be repeated three or more times during a cycle. For women who do not ovulate on their own, the goal is to have one follicle that is approximately 15 to 18 mm in size. If three or more follicles (greater than 15 mm each) are seen, the cycle may be cancelled due to the risk of becoming pregnant with twins, triplets, etc. In some situations, the cycle may be converted to in vitro fertilization, so that the clinician can control the number of embryos that are placed in the uterus.

The most common surgical procedure performed for infertility is myomectomy. It’s a procedure whereby uterine myomas or fibroids are removed either through an open abdominal procedure or through laparoscopy, depending on the number, location and size of the fibroids. Fibroids are benign tumors of the muscle of the uterus and are relatively very common. In the majority of women, fibroids do not interfere with the ability to conceive. However, in certain instances, a fibroid could be located inside the uterine cavity or just underneath the uterine lining, the Endometrium, and hence interfere with implantation. Occasionally, a fibroid can also block the opening of the Fallopian tube or get so large that it might interfere with pregnancy and will need to be removed.

Is Tubal Surgery an Option?

In certain cases, the cause of infertility is related to tubal disease. Most often this is due to scarring secondary to a previous infection such as a sexually transmitted disease or previous abdominal or pelvic surgery, such as for an ovarian cyst or appendectomy. The success rate for tubal surgery is unfortunately very low and it is not recommended especially in women over the age of 35. IVF success rates are so high for patients with tubal disease at any age that very few women undergo tubal surgical repair.

If the ligation was done with a clip and not burned or cut, then tubal reversal might be considered as an alternative to IVF. The advantages of IVF are many, however, even in these good prognosis cases. First, success rate is much higher on a per-month basis. Second, there is no surgery involved requiring an extended period of recovery. Third, if successful, the patient still has her permanent contraception intact.

Patients who are under 35 and have had tubal ligation might consider tubal reversal surgery depending on the type of tubal ligation.

Dr. Michele Evans explains that our practice will review your medical and reproductive history and conduct a basic fertility evaluation during your first visit.

If you are suffering from female factor infertility, or if you are having difficulty becoming pregnant, we are here to help. Please get in touch with us by completing our online contact form, or by calling us directly at one of our offices.